The Shocking Truth About The Pesticides in Your Food 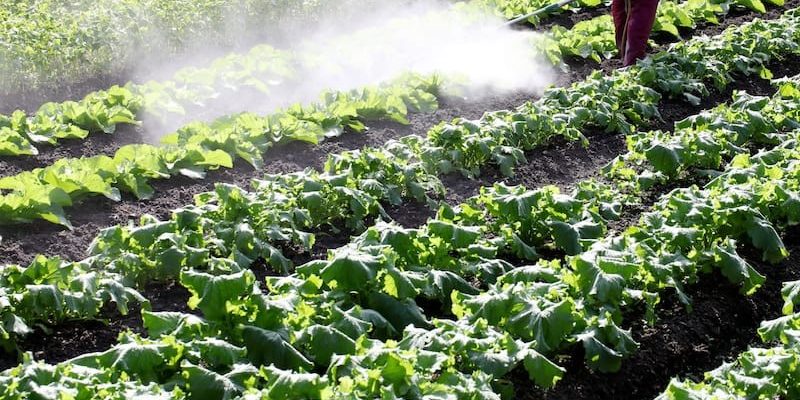 Pesticides are chemicals we use in the agriculture system to make it easier to grow crops. These chemicals kill pests, weeds, and fungus and are used by the billions of pounds.

Pesticides is an umbrella term that includes a variety of chemicals, including:

It’s not just farm workers who are exposed to these chemicals, nearly everyone is now exposed to pesticides on a daily basis. In fact, the U.S. Department of Agriculture has estimated that about 50 million Americans drink groundwater that is contaminated by pesticides. In addition to  contaminated drinking water, pesticides are in our food.

How Pesticides End Up in Our Food

In the United States, the process for marketing and selling a pesticide generally includes:

First, before put on the market, the pesticide must be proven that it will not harm the health or the environment. The chemical is supposed to be tested in short-term animal genotoxicity or mutagenicity studies.

Then, if the chemical passes the testing, it’s labeled “not likely to be a carcinogenic in humans.” At this point it can be used across all crops.

The problem is the studies are only looking at whether or not these chemicals cause cancer. What about endocrine disruption, neurological functions, autoimmune disease and more? Cancer is not the only thing we should be looking for.

Furthermore, scientists are finding these studies are too nearsighted. Research is pointing out that the effects of pesticides are often not seen until years after exposure or years of accumulation.

How Labeling Protects Pesticide Use

Another concerning aspect of pesticides, is that the FDA currently classifies pesticide use as a “process.” It’s important because this label means pesticides in our food is considered a byproduct of a process – a necessary evil if you will.

In a 2007 study, researchers set out to see if professional sommeliers and chefs could taste pesticides in wine. High-end organic and non-organic bottles of wine were chosen from different regions of France. Organic wines tended to have less pesticides, while the non-organic wines had over 4600 parts per billion pesticides detected in some cases.

What is startling is not only the prevalence of pesticides in these high-end wines, but the ability to taste them. But without knowing what these chemicals taste like on their own, how is it that you or I would know if what we are tasting are pesticides?

The Environmental Working Group (EWG) is a non-profit dedicated to environmental research and education, who has especially gained attention for their reports on pesticides in our food.

In their 2017 report, EWG ran an analysis on samplings provided by the U.S. Department of Agriculture. Of the 48 types of crops tested that were conventionally-grown, 70% of all samples had pesticide contamination. A total of 178 different types of pesticides were found on these crops.

The EWG has compiled a list of the 12 most contaminated food items, which they call The Dirty Dozen. These are the top 12 foods that test positive for pesticides when purchasing their non-organic form:

They also included some of the cleanest vegetables, which are relatively safe to buy in their non-organic form. They call these the Clean Fifteen and include:

Glyphosate is a broad-spectrum herbicide that is more commonly known as Roundup. Glyphosate kills pretty much every plant it comes in contact.

Glyphosate and its Roundup ready crops are used so ubiquitously across the world.

What is concerning is, in 2015 glyphosate was found to be a probable carcinogen by the International Agency for Research. Glyphosate had also been found to alter the gut microbiome. A 2018 study found long-term exposure to glyphosate in rats caused an altered firmicutes to bacteroidetes ratio in the gut. These microbes shifted to a balance that’s been associated with lower glucose tolerance, increased obesity, and increased risk for diabetes.

How to Avoid Pesticides

To avoid pesticides, the best thing you can do is drink filtered water and consume organic food as much as possible. It’s up to us to avoid pesticides in our food and water, we can no longer count on the government to keep us safe from things like glyphosate.

Other ways support detoxification from glyphosate include:

How an Elimination Diet Can Change Your Health
April 29, 2018

The Fake Supplement Issue No One Is Talking About – Beware of Amazon
April 29, 2018